Guédelon Castle is a wonderful piece of experimental archaeology. The project began in 1998 and they hope to have created a thirteenth century castle by around 2025. Wherever possible they use original building techniques and material are sourced from on or near to the site (an old quarry set in woodland). Workers wear an approximation of medieval clothing and use original style tools and techniques in workshops that are open to public view.

A re-creation of a medieval crane

We spent a day there (two of the 300,000 visitors a year who come). I have long wanted to visit and wasn’t disappointed by the experience. My lack of French meant that the presentations were beyond me but the site itself talks to anyone with an interest in castle and medieval life. 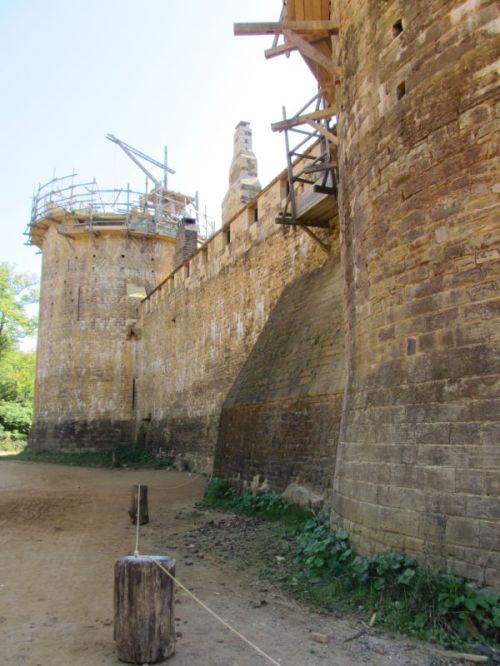 The largely complete northern side of the castle

The building site brings helps to make sense of manuscript drawings and the surrounding village opens your eyes to the scale of the enterprise. Most castles would have been built more quickly that this so the resources required would have been even greater.

It’s a Not A Castle because it is out of time but it gives great insights into castles, castle building and castle life. I thoroughly recommend it as a day out.

The tower is now used by Worcester’s private King’s School as an archive. Their site describes it as…

…originally the main gate to the castle and priory and known, until the late 19th century, as St. Mary’s Gate. The present tower dates from the 14th century but was originally built on King John’s orders from wood and stone of the best quality. For many centuries there was a statue of King Edgar (crowned by Oswald in 973) and this is why it became known as Edgar Tower. The present statues date from the restoration of 1910.

The majority of the castle has long since disappeared. The gate now ‘protects’ the cathedral church’s precincts known as Cathedral Green. It’s predecessor, along with the north part of the castle site, was given to the priory in around 1217.

Many of Worcester’s medieval buildings (including England’s last cathedral lychgate [and here]) around the cathedral were destroyed in the mid-1960s so the Edgar Tower is now ‘out of context’ from the outside.

The Gatehouse Gazeteer has information on the gate under it’s Worcester Cathedral Priory entry. In that entry it mentions the possibility that it was once a gate of Worcester Castle, but the castle’s entry does not mention the gate. As usual the Gatehouse site provides excellent links to other resources on both building complexes.

Worcester City Museum’s site has a picture of the castle as it would have been in the year 1250. The site of the Edgar Tower is already part of the cathedral/priory complex on the lower right of this picture. They also have a 1781 print of the gatehouse by W. Williams on their site.

A model of Carlisle Castle made of custard creams

The blog is on its Summer break because of work commitments but this news article couldn’t be ignored.

We’re building up a backlog of amazing NACs which should start appearing in the Autumn.

Named for its proximity to Lewes Castle.

My thanks to Pat Roberts for spotting this building.

A cardboard castle for your pets

I spotted this in a local shop window but they seem to be widely available (other suppliers are available). It’s a four-storey rectangular keep, great tower or donjon with a stair turret at each corner. It seems to have a drawbridge.

I notice that it is recommended for, amongst other animals, rabbits and ferrets. I’m guessing that this is not at the same time (unless you are trying to create a medieval siege effect).

This is a private house on Bexhill Downs. The plaque says it was built in 1905 but, then again, the clock was wrong. 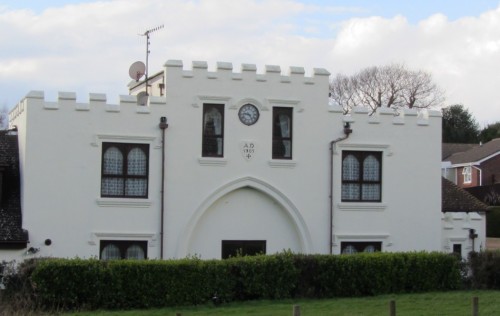 The crenelations win it NAC status. The gatehouse form (two flanking towers) is also impressive. I like the gothic arch over the front door. The date shield stands in for the heraldry often found over castle gates.

Semi-detached houses with just a touch of crenelation.

Two Edwardian houses on the road between St Leonards and Hastings. A mixture of styles but the crenelations are a nice touch.

I stumbled across this lovely NAC by accident. The title of the post (‘Almost a Castle’) alerted me to its possibilities. 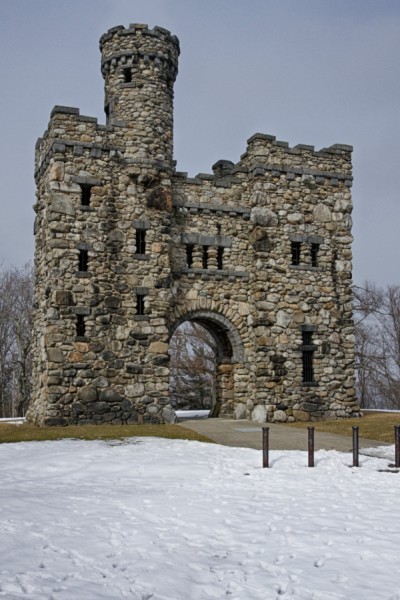 Copyright © 2012 by Ken Shores and licensed for reuse under this Creative Commons licence (Attribution-NonCommercial-ShareAlike 3.0 Unported)

The building seems to be a folly set up as a memorial to George Bancroft in Worcester, Massachusetts, USA.

The full details of the building are on the ShadowedHills blog.

An extension to a Victorian stately home

This striking tower was built in 1870 as an extension to a stately home by Henry Thomas Foley, the 5th Baron Foley (so it’s a Foley folly). It is said that he built it for his wife Evelyne. Queen Victoria may have been a visitor.

Most of the old mansion has been demolished but the tower remains as a private residence. There is no public access but it is visible from the road.

It is possible that many medieval castles would have been rendered and/or painted white. This may be the building’s most authentic feature – the crenelations are of odd proportions and the windows and arrow slits are definitely decorative. The overall effect is impressive though.

There’s a news story about ex-Rolling Stones guitarist Ronnie Wood leasing the tower here which has a couple more pictures.

According to Wikipedia (I know, I know) The Loneliness of the Long Distance Runner was filmed here. It appears as Ruxton Towers in the film.

My thanks to Frank and Jean for spotting this building, telling me about it and coming up with the ‘Foley folly’ pun.

A school building with an impressive, castle-inspired, Victorian Tudor ‘gatehouse’

Wolverhampton Grammar School in Compton Road was built in 1875 in the Tudor revival style. What makes it a NAC is that fabulous crenelated gatehouse tower complete with (too wide) ‘arrow slits’ and a stair turret. The horizontal bands and heraldry create an impressive effect. 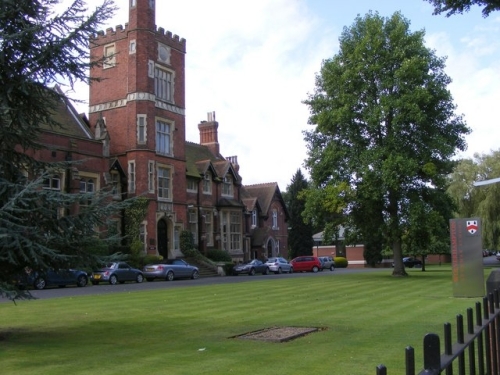 It consciously apes an Elizabethan palace but as they, in turn, aped castles, it is an NAC at one remove.

There’s a good history of the building at historywebsite.co.uk which is a good resource for the history of the Wolverhampton area. The site also points out that the Royal Wolverhampton School in Penn Road is a finer Tudorbethan building. However, it is definitely in the style of a fine house and not a NAC.

My thanks to Katie Davies for spotting this building and telling me about it.

Not a Castle
Blog at WordPress.com.